For this blog post, I focus on the rhythm of Received Pronunciation after my practice on word-level and sentence-level stresses last week. Working on English stress was not an easy thing for me to do since stress is not a significant feature in my native language, Indonesian. Indonesian is a syllable-timed language in which the length of an utterance depends more or less on the number of syllables in the utterance for each syllable has a fairly regular stress, whereas English is a stress-timed language in which the length of an utterance does not depend on the number of the syllables but rather on the number of stresses. Therefore, in English it is possible to have a sentence which has the same stress pattern as a multisyllabic word. These examples from Celce-Murcia, Brinton, & Goodwin (2010) provide good illustration on the similarities between the stress pattern of multisyllabic words with simple sentences: 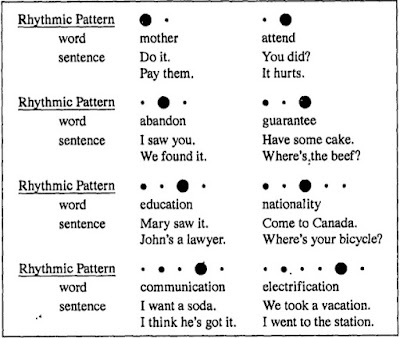 Reflecting back to my previous recordings, I found out that most of my recordings are longer than my archetype which show that my pronunciation is still very much influenced by my native language especially on the stress pattern I assume. I probably still pronounced unstressed syllables longer than they should be. Thus, the practice on rhythm that I have been doing this week will be beneficial for me in enhancing my English pronunciation.

I started my deliberate practice by reading theories on rhythm first since I did not remember learning this specifically in college during my bachelor degree program. Discussion on rhythm is closely related to word and sentence level stresses in that rhythm is a combination of beat patterns of strongly stressed, lightly stressed and unstressed syllables and pauses (Celce-Murcia, Brinton, & Goodwin, 2010). In other words, it involves stressing and de-stressing of syllables to create the musicality of the language. I learned that Native speakers of English rely on the distinction between these stressed and unstressed syllables when listen to people in that they focus more on the stressed syllables to get the meaning of the utterances. Therefore, failure to produce them correctly may hinder their understanding on the utterances. Thus, I realize that it is really important to learn the stress patterns of English as well as to teach these stress-timed nature or rhythm of English to EFL learners. The stressed-timed nature of English is well illustrated in this following figures from Celce-Murcia, Brinton, & Goodwin (2010), and I found them useful for my drilling practices:

From these two figures, it can be seen that even though these sentences have different number of syllables, they have roughly the same length of time to pronounce since they have the same number of stressed elements. The consequence of this is the length of time to pronounce each stressed syllable is different in order to accommodate the unstressed syllables. Also, it can be seen that native speakers of English usually put stress on content words (words that carry information) and leave the function words (words that signify grammatical relationships) unstressed. These videos also helped me to understand rhythm in English better: 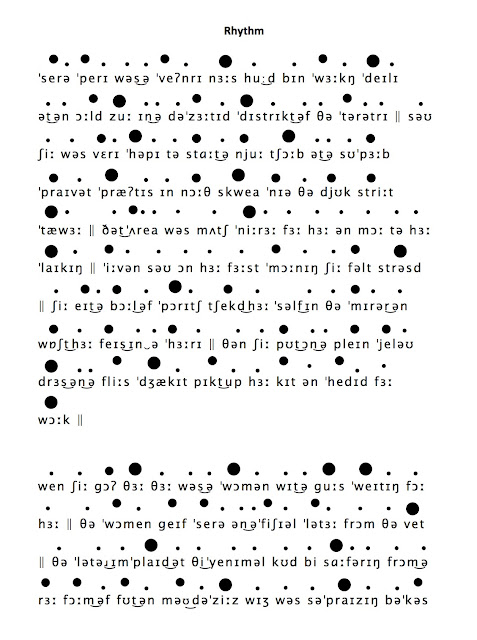 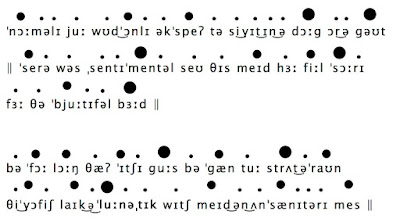 The smallest dots show the unstressed syllables; the medium-sized dots show the stressed syllables, and the biggest dots show the sentence-level stress or the stressed words in sentences. When I tried to record myself for the first time after practicing this rhythm patterns, I found it more challenging since I was more aware of rhythm patterns, and I tried to be as precise as possible, but it turned out to be too exaggerating. Here is the result of my recording after several trials:


It is not perfect yet, but I am sure with more practice it will get better. For the next blog post, I will focus my practice on the prominence.

Email ThisBlogThis!Share to TwitterShare to FacebookShare to Pinterest
Labels: Rhythm